BIOGRAPHY
Vadym Iermolaiev is a famous Ukrainian businessman and investor, one of the main developers of Dnipro. Founder of the “Alef” corporation, which unites more than a dozen independent diversified businesses. Among them are factories for the production of building materials, accessories, profiles for windows, dental implants, wines and others. Founder of Alef Estate, which built in Dnipro such objects as “MOST-City”, “Cascade Plaza”, “Bosphorus”, “Enigma”, “Prism” and others. Creator and investor Ekaterinoslavskogo Boulevard. 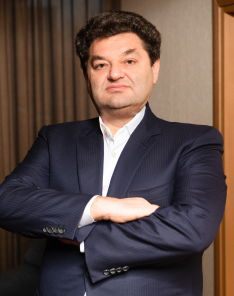 Vadym Iermolaiev was born on May 13, 1968 in Dnipro. Since childhood, was interested in entrepreneurship. Went to the Dnipropetrovsk Technical and Economy College in 1983. At the end of the school he joined the army.
FIRST PROJECTS

In 1995, Vadym Iermolaiev created a company called “Primus inter pares” (from Latin - "the first among equals"). Two years later, the company grew into the commercial and industrial corporation "Alef". At the beginning the company was engaged in the import of food, detergents and other consumer goods on the territory of Ukraine.

One of the first productions established by Vadym Iermolaiev was the company for the production of wines "Alef-Vinal". It began its history in 1999 from the launch of its own brand "Golden Amphora". Today, the company Alef-Vinal is one of the leading alcohol companies in Ukraine, and the company's products are sold in 25 countries of the world.

Create a successful business and sell it to competitors

In the Ukrainian market, the main competitor for Olbia was the American transnational corporation Procter & Gamble.

“For several years we worked,“ fought ”with this company, after which Procter & Gamble made us an offer, which then stunned us - to redeem our enterprise,” says the businessman.

In April 2004, The Procter & Gamble Company acquired the Olvia-Beta complex, part of which belonged to Vadym Iermolaiev.

After that, a number of businesses created by Vadym Iermolaiev were acquired by international companies. For example, four years later, Agrobank, created by a businessman in 2002, was sold to the Czech financial group PPF.

The “Alef” corporation which belongs to Vadym Iermolaiev quickly developed in various directions. Some businesses arose due to interesting ideas that future partners offered to Vadim Yermolaev. Other enterprises appeared due to the ideas of the businessman himself.

In 2002, the LunaPack cardboard packaging factory was established, the main consumer of which at the initial stages was the above-mentioned Olvia factory. Now "LunaPak" produces packaging for various food, confectionery, cosmetic and alcohol enterprises.

Vadym Iermolaiev established the agricultural machinery distribution company Agroalliance in 2001. Today, the company is the official dealer of Case IH equipment (USA) and distributor of such world leading equipment manufacturers as: Flexi Coil (USA), MX (France), Gregoire & Besson (France), Moresil (Spain), MaschioGaspardo (Italy ). Vegetable direction was opened in 2014 in which the company cooperates with Miedema (Netherlands), DEWULF (Belgium). Later, dealerships were obtained for FPT engines, brands for the production of Dal-bo soil tillage equipment (Denmark), Alpego (Italy) and TMC Сancela (Spain). Recently, the company also became a dealer of the brand of telescopic loaders premium-class Manitou (France) and a brand for the production of engines for industrial use Mahindra (India).

“Our example shows foreign investors: Ukraine has a favorable business environment. Entrepreneurs often need a calculator to understand how promising it is to invest in Ukrainian business, ”said Vadym Iermolaiev during a speech at the International Economic Forum 2018 in Dnipro.

In 2016, Vadym Iermolaiev’s investments allowed the opening of an innovative factory of dental implants and medical instruments ABM Technology in Dnipro. Thanks to high-precision Japanese, German and Swiss equipment, this Ukrainian plant is one of the most modern plants of this type in the world.

When dreams get the foundation

Vadym Iermolaiev is known as one of the largest developers of Dnipro. It is construction that he considers the business of his life.

“I love to build. My favorite project is construction in the city of Dnipro ”.

In 2001, Vadym Iermolaiev actively participated in the process of forming a new look of the city. The first projects of the company were two small commercial buildings on Karl Marx Avenue (now Dmitry Yavornitsky) and Pushkin Street. The start was successful, and the continuation followed immediately: in 2004, the first large shopping and entertainment center “New Center” was opened in Dnipro. At the same time, the construction uses unique technologies that allow you not to demolish the historic building, but to integrate it into modern urban landscapes. So, during the construction of the business center "Prism", the facade of the building managed to update and integrate into a modern structure of glass and concrete. And during the construction of the shopping center “Most City” a small synagogue was preserved, located in the development area. Vadym Iermolaiev is also the creator and investor of Yekaterinoslavsky Boulevard, a cultural pedestrian site in the historic center of the Dnieper. Now this place is decorated with special lighting and numerous works of modern art. The inhabitants of the city themselves called Ekaterinoslavsky Boulevard the “corner of Europe in the Dnieper”. The Bosphorus business center was also erected there and shopping center Cascade Plaza.

In 2006 in Dnipro "grew" the largest at that time shopping and entertainment center of Ukraine "Most City". It was planned to build the highest building in Ukraine next door - the 54-storey multifunctional complex “Brama”. So far, the plan has failed to be realized, but Vadym Iermolaiev does not give up his plans. 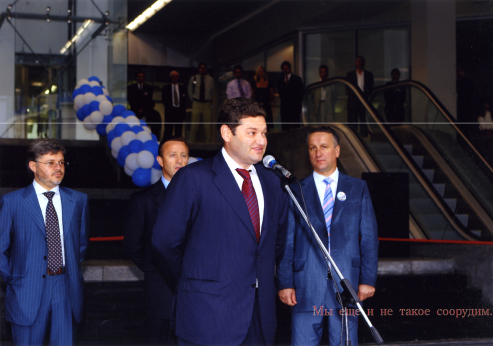 In 2012, Vadym Iermolaiev became one of the patrons of the Kiddo Foundation.

The work of the foundation is aimed at helping seriously ill children and their families. As of 2018, the total amount of funds raised by Kiddo was more than 30 million hryvnia. This money was sent to the treatment and rehabilitation of 250 seriously ill children, as well as to help three children's departments of hospitals, five boarding schools and orphanages.

Popular Ukrainian and foreign publications often include Vadym Iermolaiev in the lists of the richest people in Ukraine. But the businessman admits:

“I do not work to climb the steps of various ratings. I can not sit back. I love to create, build, develop something. My work is my life. ”