Interview with Vadim Ermolaev: on the Construction of a Biofuel TPP, Future of Shopping Malls and prestige of a Tradesman

Vadim Ermolaev is a well-known businessman and investor, one of the largest developers of Dnipro. He is called the man who changed the face of the city. He constructed such objects in Dnipro as Most City, Cascade Plaza, Bosphor, Enigma, Prism and also created the Yekaterinoslavsky Boulevard.

Vadim Ermolaev is a founder of Alef Corporation, which includes more than a dozen diverse businesses.

Recently, the businessman has been interviewed by Andrew Ostapchuk for the blogger’s YouTube channel. During the conversation, Vadim Ermolaev spoke about new construction projects, in particular, his plans to build the most powerful biofuel thermal power station in the country, as well as the first automated parking in Ukraine. Also, the investor told about his business partners.

The main theses of the interview are given in print format.

About Cooperation with Turkish Business Partners

How did you meet Mustafa Baser?

At that time, we imported detergents from Turkey, and his company was engaged in their sales, since they have been producing them. So we met then, purchasing products from them.

If you have been buying their products, why they wanted to open Olvia-Beta plant with you?

In any case, local production is more profitable than spending money on logistics. They brought raw materials from all over the world, produced washing detergent, and in our case, they began to bring this raw material to Ukraine and produce it here.

When I consulted with Oksana Kaletnik regarding the interview, she said that not a single plant in the world has been built according to the plan. It is interesting to learn about the difficulties of construction those production facilities wherein you participated, starting from Olvia-Beta.

Our Turkish business partners were fully engaged in the entire production part, technical part, and marketing. So to speak, they undertook this honourable mission and coped with it with great success.

What businesses do you have with your Turkish partners now?

We jointly produce plastic window profiles, window fittings and aerated concrete. These enterprises include MIROPLAST, Axor and UDK. At that time, the price of a plastic window profile was very high in the Ukrainian market. So, we have made some calculations and estimations, built the enterprise and it works. The same thing happened to UDK. Although, aerated concrete was USD 120 per cubic meter at that time, comparing to, probably, maximum of USD 50 now. But, nevertheless, the price has fallen, but we still continue to work.

About Construction Projects in Dnipro 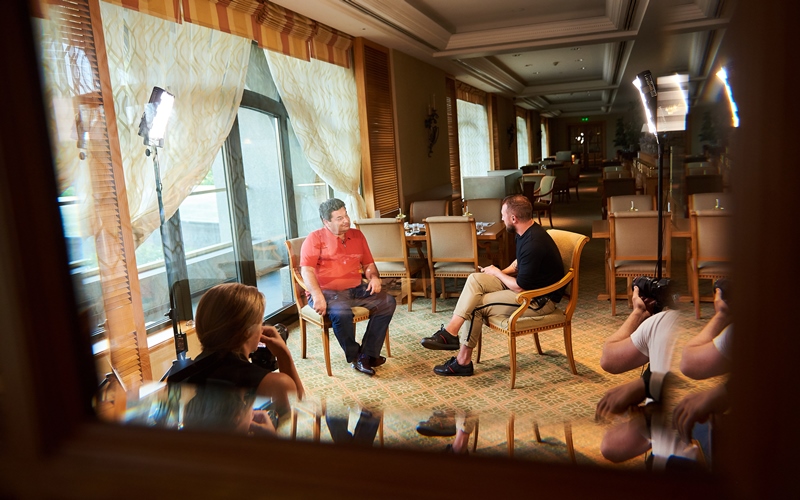 Will construction of Brama, the tallest building of Dnipro, be renewed?

This is a very complicated issue, because Alexander Dolnik designed it so reliable that the cost of this building is very high. Its construction is possible only if the sale price of real estate rises. If it remains the same as today, this project is still unprofitable. But we really hope that the price can rise, and we can still erect this architectural creation.

I heard of USD 3,000 per square meter if I was told correctly…

This was the planned selling price in 2010 when we were involved in the design. At that time, the cost of construction was very high, which decreased today, and sales prices were quite high. Now everything has changed dramatically.

What is the essence of the IT House project that you are doing?

For the sake of simplicity, it is impossible to build a parking lot of less than 35 sq. m in an ordinary building, because there are entrances, exits, ramps and the so-called “inconvenient spaces”. Automatic parking allows placing one car on an area of 11 sq. m. The cost of such parking is the same as of 35 sq. m per car. That is, there is no benefit in money. But the benefit is that it is possible to make more parking lots on the same square. There is a deficit in them, and it will be growing over the years.

About Future of Shopping Malls

Alexander Melamud, a co-owner of the Dream Town shopping mall, said that shopping malls were a relic of history. What do you think in this regard?

I think that shopping malls have always been and would be always. Their formats will change, but shopping is still entertainment for people. People are not ready to just sit in front of a TV or computer and have fun in this way. They have to go somewhere.

A shopping mall has already turned into a place of entertainment. It’s just that these entertainments will change. It was a purchase and a movie yesterday. It will be some kind of cyber-arenas and something else tomorrow. No one has cancelled such entertainments as food courts, where people come, eat, talk and have fun together.

But the fact that the rental price will fall is a must.

You mean that this business can become unprofitable at some point…

About the Sale of Agrobank

At that time, we had a partner who proposed creating a bank. He managed it successfully, while being the Chairman of the Board thereof. Afterwards, we have sold the bank.

How did you find the buyers, the Czechs? [editor’s note: Vadim Ermolaev has
sold JSC Agrobank to PPF, the Czech Financial Group]

They approached us. Their representative arrived, we had several conversations with him, then he offered decent money and we sold it.

On the Construction of the Most Powerful Biofuel TPP in Dnipro 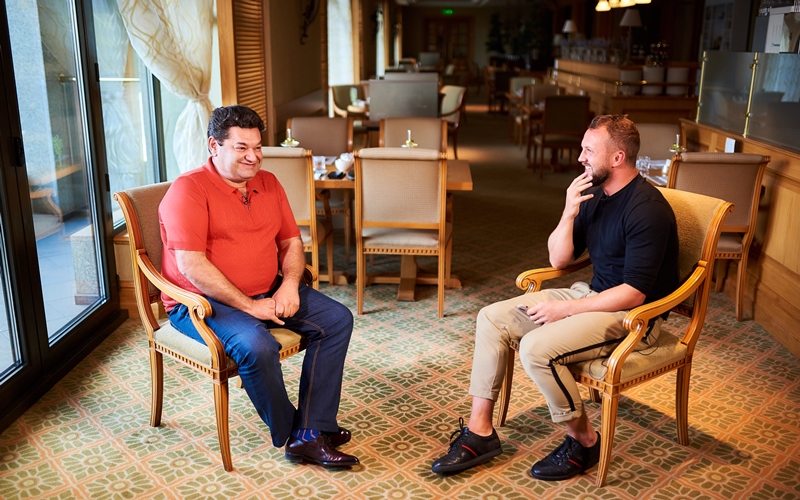 You are building the TPP near the Potoki plant now. What proportion of the
energy will be supplied to the plant?

It will all be for sale.

How profitable is this business?

We do not know yet whether this business is profitable or not, because the price of fuel is volatile. Before we have started the construction, the pellet cost was UAH 1,000, and rose up to UAH 3,600 in December last year and January this year. We do not have a full understanding of cost efficiency.

On the Fight against the Outflow of Labour Resources Abroad

How do you fight with the fact that people go abroad?

To date, exclusively by means of salaries. People, leaving Ukraine today, try to earn a little more abroad, although they live there in much worse conditions, being apart from their families and relatives. But money is what matters. And the salary, which is slightly higher then, let’s say, in Poland or the Czech Republic, is attractive.

Although today, salaries have also become very high at Ukrainian enterprises. Workers at our enterprises can earn from the production, it could be 30 or 35 thousand hryvnias. This figure is already more than a thousand dollars a month.

I think that it’s simply not prestigious for many to work in factories. So, the State should do something to raise the prestige of such trades. The work of simple workers should become honourable, since all cannot be lawyers and businessmen.

About Black PR, Extortion and “Smuggling” 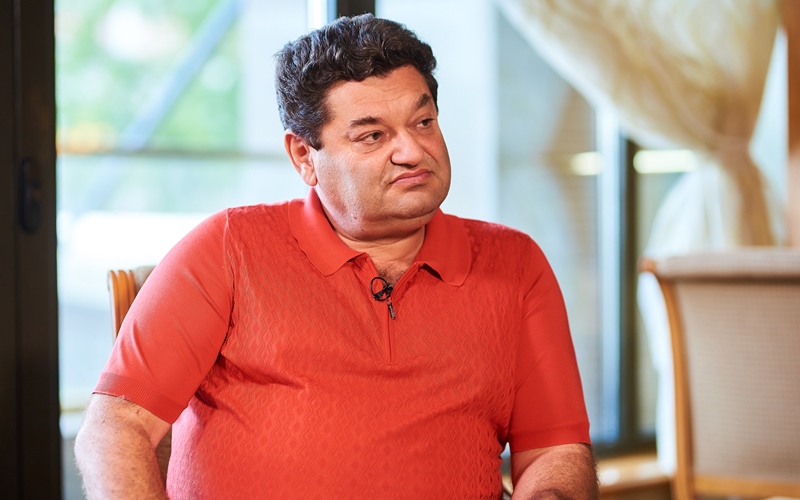 I came across a lot of negative feedback [editor’s note: to you]. Who orders
this negative comments?

The police have found a man who posted dirty publications against us for a fee. But even the essence of all these publications has nothing to do with reality.

If the duty was 0% on one tractor, and 5% on the other one, I would understand the logic of all this. But the duty is the same for both. And the customs guy categorized this tractor as municipal vehicles. They initiated a criminal case, overblew the story arguing that it was smuggling. But what smuggling we are talking about? The taxes are the same, everything has been paid. The case got nowhere, because there was no damage. The guy was punished for carelessness: he was fired. But the press claimed for several years that we were involved in smuggling.

Have anybody extorted money for deleting the publication?

The story was a mess. There were so many different bad publications. Someone contacted us regarding their removal. At some point, we have paid USD 500 several times to remove the negative posts. After that, negative information began to grow like a rolling snowball, and we realized that paying for every removal of this false information would simply turns into global extortion and blackmail. We turned to the police that have been searching for a long time, but able to find one of these guys. He was obliged to refute the information. We do not have any kind of punishment for a person telling lies of someone.

About the Work with Stanislav Vilensky

What are the pros and cons of doing business with your family? As far as I
know, your business partner is Stanislav? [editor’s note: Stanislav Vilensky is the Deputy Chairman of the Board of Alef Corporation]

Yes, this is my second cousin.

What are the disadvantages of business when you do it with your second
cousin, for example?

There are none in my case.

He is described as a Nobel laureate…

This is a joke; he has never been a Nobel laureate. He was just a physicist, and taught at the University. I offered him a job. Two or three times I came to the University.

Once I went into the classroom where he was giving a lesson. He was standing at the blackboard, writing something. I looked at the audience and revealed that besides him, nobody was interested in what he was writing. I had the feeling that no one understood what he was saying at all. I waited for him to finish and called for him. I asked him what salary he was receiving at the University. He calculated something and named about 5 dollars a month. This amount was not enough even to go to the dining room and have 10 meals. So, I was going to him to offer him a job.

After the third time offer he decided to join me for a month. I asked: “Why for a month?” And he said: “I need to get published several times in foreign magazines in order to pass PhD defence.” He needed USD 100 to publish an article on the work he was doing.

So, he came to our Company, worked for a month. I asked him: “Well, what`s next?” He decided to stay for another month. Then the second month passed, and he said: “Well, I’ll probably stay for another month.” Then he stayed. After some time he was given the Soros Fellowship for his candidate paper, but he donated it to young scientists at that time.

If you were starting from scratch now, what business you would be engaged
in?

You see, I don’t know what will happen next, I just know what is now. So, I can’t predict what will be the driver of something in a year. Young businessmen do not know either. Most interesting, no one knows this, either I, or they.

But if you were to start all over again tomorrow, what business area would be chosen by your intuition, without start-up capital?

I think that this is all, of course, related to IT for people with or without start-up capital today. The market is huge, limitless. There are a lot of smart young people in Ukraine. If you don’t know how to do it yourself, you can organize a group of people who can do this, become the leader of this group and strike this path.